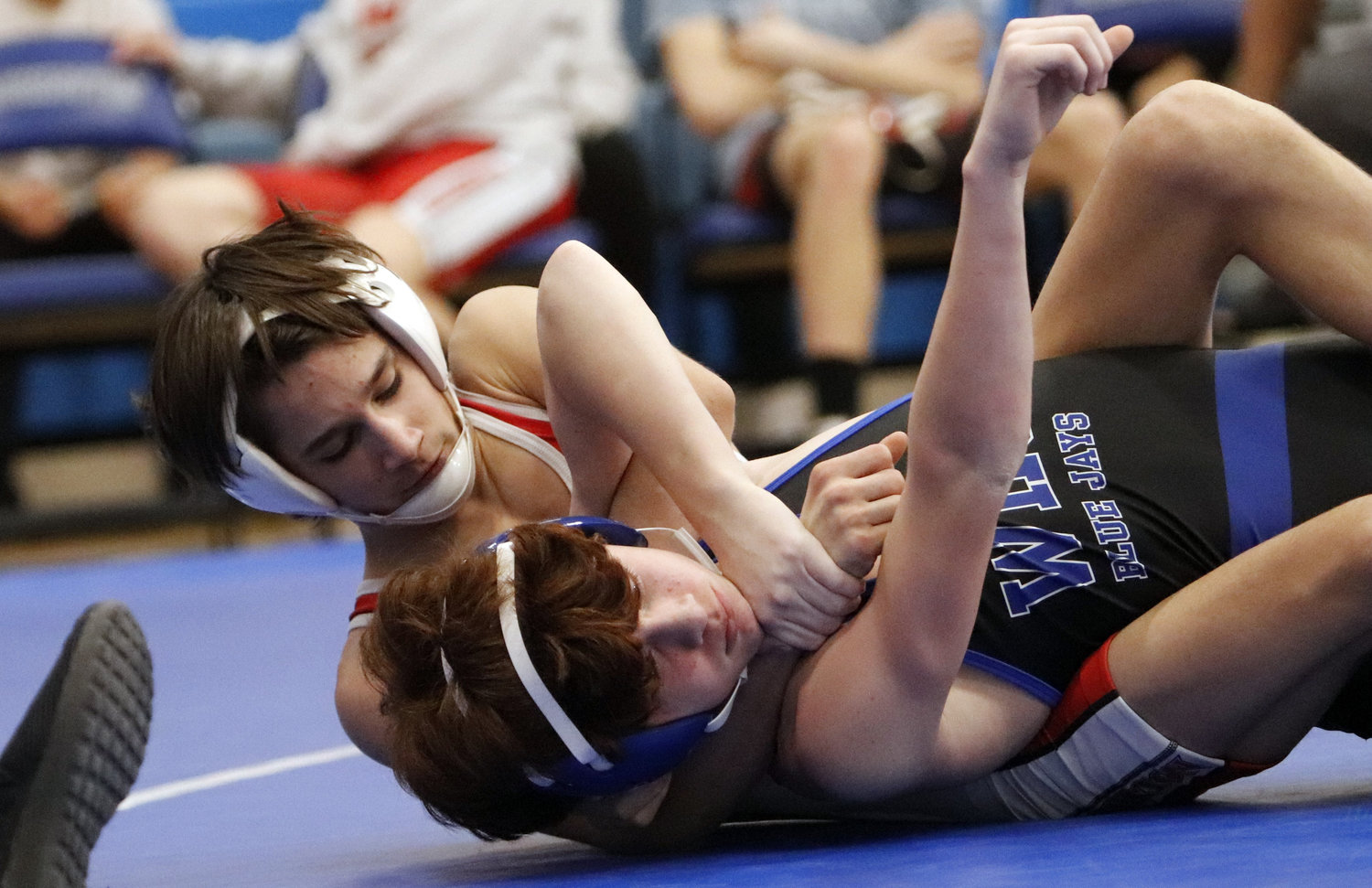 McCauley pinned Gray from Francis Howell Central in 3:09 in the 106-pound championship match to cap off a 3-0 tournament. McCauley beat Brody Apenbrinck of North Point  16-0 in the quarterfinal match. He beat Kanyon Shurtz of Ft. Zumwalt South 19-4 in the semifinal match.

Junior Jacob Ruff nearly joined McCauley as a conference champion, placing second in the GAC in the 190-pound weight class. He lost to Deacon Moran of Ft. Zumwalt North 8-7 in the championship match. Ruff won his first three matches in the tournament to advance to the championship match. Ruff won his opening match of the tournament 16-1 over Jake Coll of Ft. Zumwalt South. He pinned Dalton Cosack of Holt in 25 seconds to advance to the semifinals. He topped Irvin Hegemann of Francis Howell 7-4 in the semifinal match.

Jeremiah Kassing and Noah Lohrmann reached the semifinals in their weight classes. Kassing pinned Chaz Mitchell of Francis Howell Central in 36 seconds to advance to the semifinals. After Kassing fell to Nathaniel Provost of Ft. Zumwalt North, he beat Kaden Helton of Francis Howell 17-2 to advance to the third place match. Kassing lost to Carter Barnes of Troy Buchanan 6-4 in the third place match.

Lohrmann beat Charlie Reid of St. Charles 11-2 in the quarterfinals. Lohrmann fell to Brayden Eikermann of Francis Howell in the semifinal match. Eikermann pinned Lohrmann in 5:49. Lohrmann lost his consolation semifinal match to Zack Tihen of Ft. Zumwalt South before pinning Reid in 4:20 to win the fifth place match.

Anthony Lombardo went 3-2 on the day to place fifth in the 165-pound weight class. After Lombardo dropped a 5-4 decision to Andrew Peppin of Holt in the quarterfinals, he pinned Grady Colombatto of Francis Howell and Troy Emge of Ft. Zumwalt North to advance to the consolation semifinals. Lombardo was pinned by Jackson Sapp of North Point in the consolation semifinals. Lombardo won his final match of the day with a 20-6 win over McLaine Graham of Washington.

Hushawn Perkins won a pair of matches in the 120-pound weight class and placed sixth in the tournament. He earned wins over Jacob Paige of Timberland and Luke Knickmeyer of Francis Howell.

Warrenton placed eighth as a team. They finished with 96.5 team points.

Madisen Nash placed sixth for the Lady Warriors at the GAC Tournament. Competing in the 145-pound weight class, Nash earned a win over Bella Antal of Ft. Zumwalt West. She pinned Antal in 51 seconds. Nash was pinned in her quarterfinal and consolation semifinal match. She fell to Hailey Paul of Francis Howell Central 6-5 in the fifth place match.

The Warrenton wrestling teams are slated to compete at the St. Charles Invitational Friday and Saturday.