Five people and one business were honored as outstanding contributors to their community during the Warrenton Area Chamber of Commerce’s annual awards ceremony on Jan. 13. 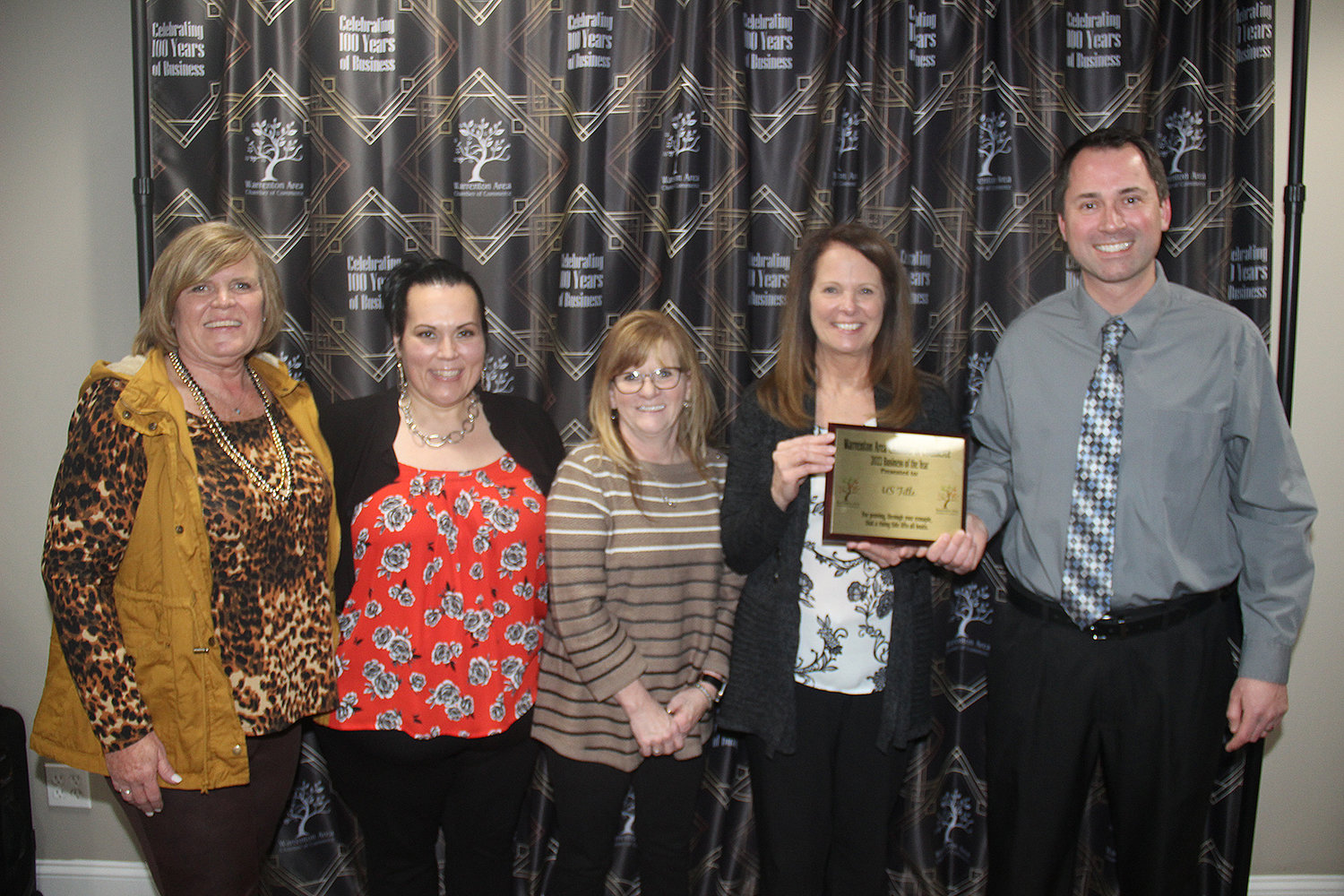 BUSINESS OF THE YEAR — Recorder Christy Bonstell and Mindy Kimler, Tracy Smith and Jeanette Hooton of U.S. Title accept the business of the year award from board member Dan Dieckmann.
Adam Rollins photo 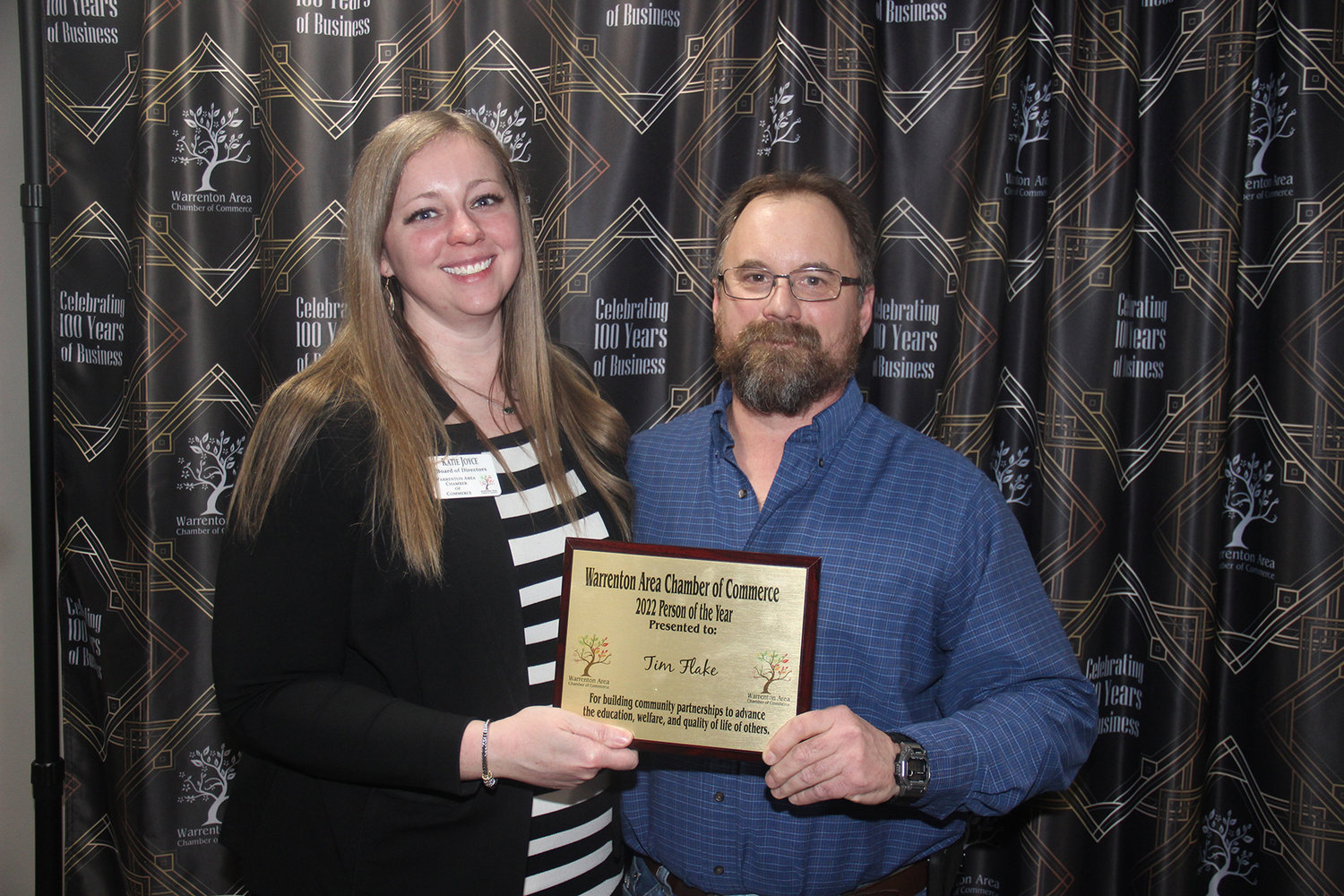 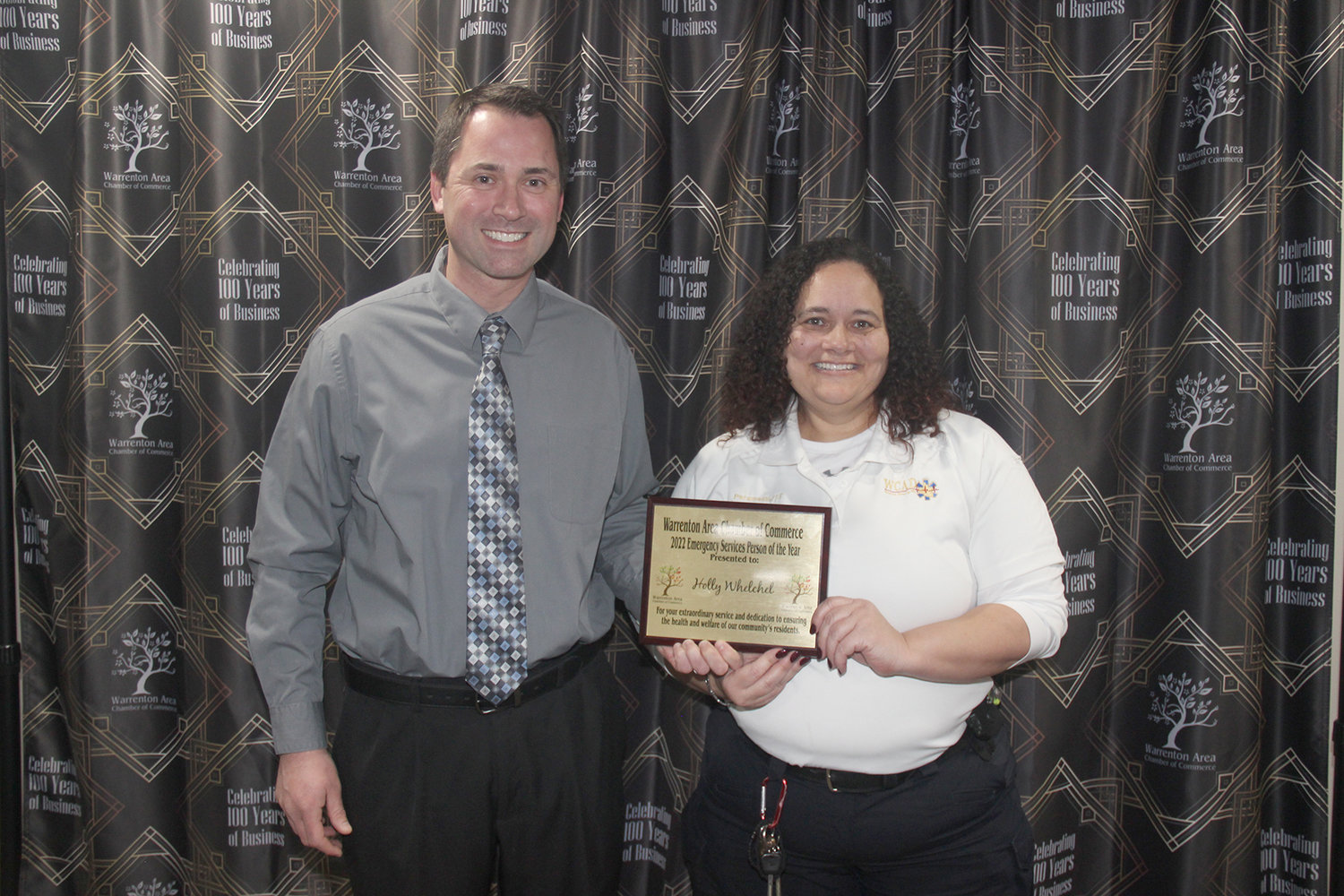 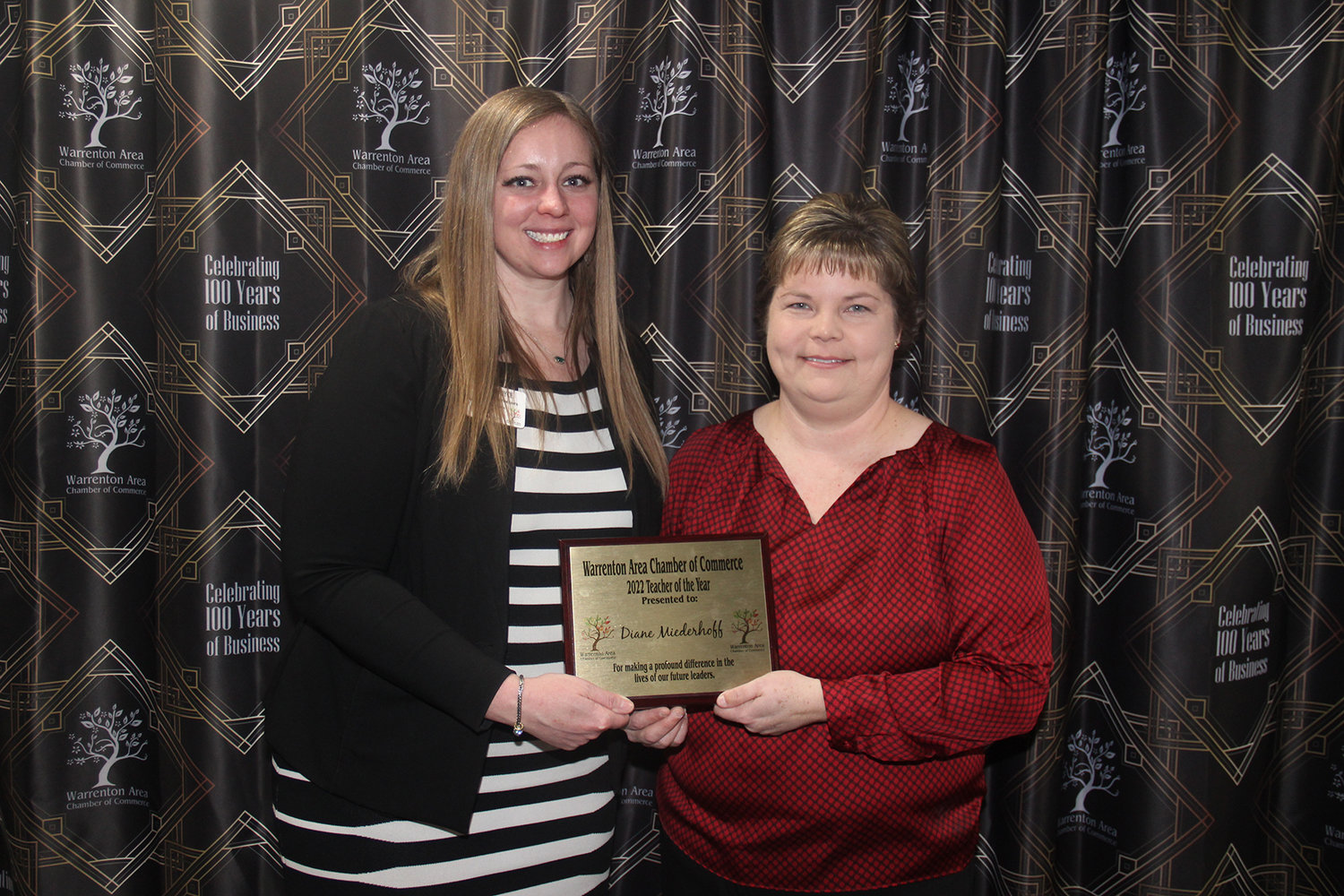 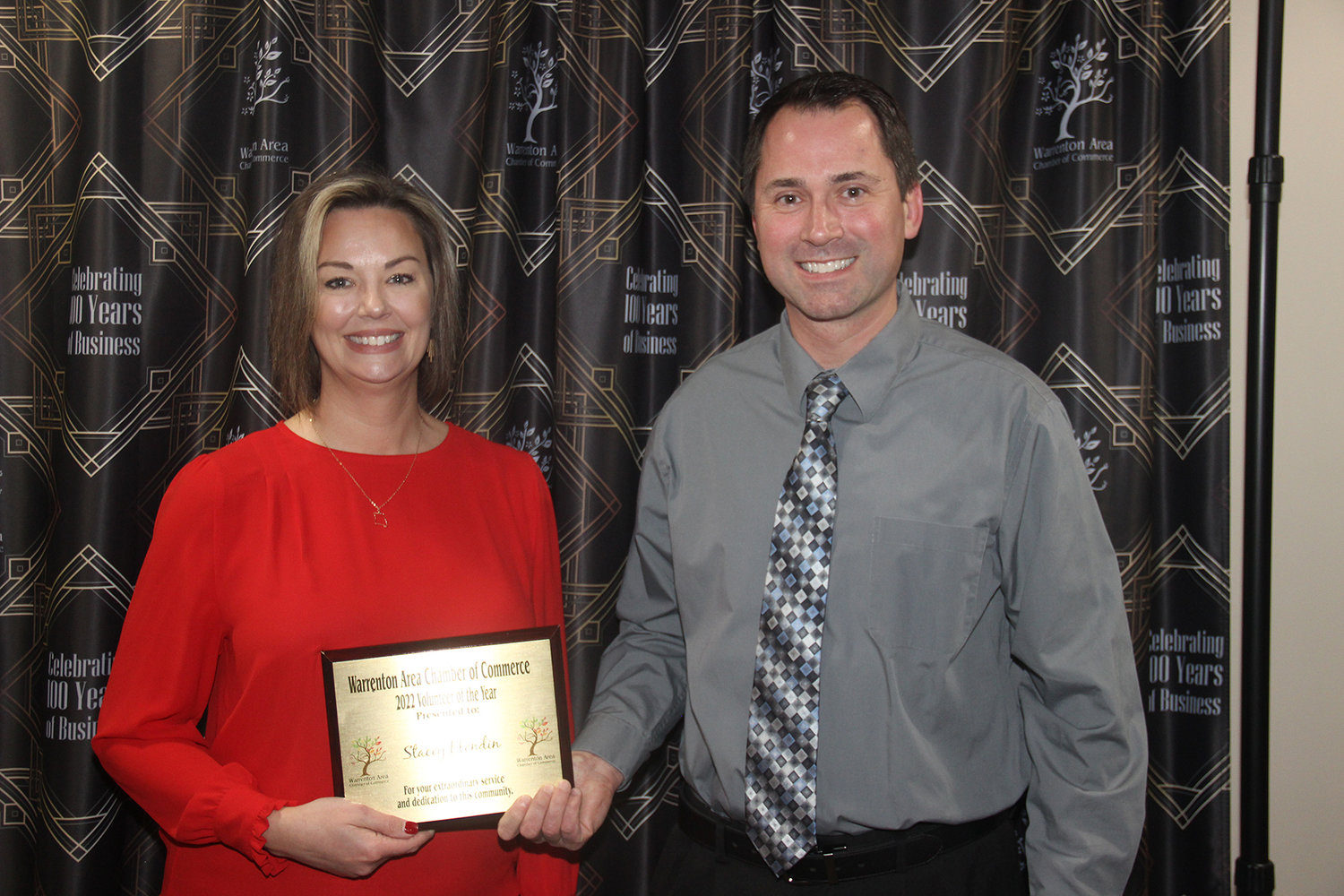 Five people and one business were honored as outstanding contributors to their community during the Warrenton Area Chamber of Commerce’s annual awards ceremony on Jan. 13.

The honors were announced during the Chamber’s annual banquet, held this year at Country Lake Golf Club. The awards recognize some of the community’s most deserving people in public service, private business, and volunteer organizations.

These are this year’s six award winners:

Business of the Year

The Warrenton Chamber’s highest honor for a community business went to U.S. Title. The business was recognized for having a hand in efficiently and professionally handling real estate transactions for over 30 years, as well as consistent participation in community improvement groups.

“This has been a wonderful experience working with this group, and all of the real estate agents in Warren County,” said Christy Bonstell, a longtime U.S. Title employee who only recently left after being elected as the Warren County Recorder of Deeds. “They have been awesome to work with, and they’ve become our friends.”

Other businesses nominated for the award were Olive’s Bakery and Warren County Pathfinders.

Person of the Year

The Chamber’s highest award for an individual this year went to Tim Flake, a longtime participant and leader in multiple charitable and nonprofit groups, including the Chamber, as well as a longtime emergency responder.

“I’m an old dinosaur of the Chamber. I’ve been around forever ... and I’ve been glad to see it grow,” Flake joked. “You guys have your work cut out for you. Warrenton is growing, and the Chamber is going to grow.”

Other nominees for the award were former educator and frequent volunteer Rich Barton, and veterans memorial advocate Beth Vincent.

Emergency Service Person of the Year

The award for first responders who provide exemplary service and set an example for their peers was granted to Holly Whelchel, a medic with Warren County Ambulance District.

Whelchel has spent decades working for the ambulance district, is an encouraging role model, and frequently steps up to provide medical staffing at large public events, according to her nomination.

“I enjoy my job and working with community members,” Whelchel said. “This means a lot to me.”

The other two nominees for the award were Capt. Teddie Anderson of the Warrenton Fire Protection District, and dispatcher Sean Casey with the Warren County 911 Dispatch.

Educator of the Year

The honor for a standout educator went to Diane Miederhoff, one of Warrenton’s agriculture teachers and an FFA advisor. Miederhoff was recognized for two decades of teaching, as well as for being an active mentor for students outside the classroom and a driving force of FFA community service.

“I’ve been very happy to see the ag program grow and look forward to what the future holds for us,” Miederhoff commented. “This has been a great way for me to put my passion for agriculture and my love of kids into one.”

The other nominees for the award were elementary teacher Tracy Halter and elementary Principal Steve Weeks.

Volunteer of the Year

This award for one of Warrenton’s most dedicated volunteers went to Stacey Blondin for her contributions to numerous area organizations, including leadership roles in programs involving children in need, veterans, and community development.

Blondin thanked both her husband and the employees of her business, Main Street Real Estate, for helping to assist in her efforts.

“They rally behind me to do anything. They’re there to cheer me up and encourage me,” she noted.

The other nominees for the award were Brian Gleize, who serves with several area nonprofits, and Heather  Haas, who serves on the boards of Turning Point and Kiwanis.

The Alan Dreyer Memorial Ambassador Award goes to a person who is a consistent positive presence, inviting others to become more involved in community organizations. This year’s award was given to Jan Olearnick, the longtime executive director of the Chamber who retired in 2021.

“Jan grew the membership base into what it is today. She loved connecting with all businesses; however, small business owners were always dear to her heart,” Chamber President Katie Joyce commented.

Over 17 years of work, Olearnick organized numerous social events, fundraisers, and marketing programs that helped bring together businesses and promote them in the community. She also spearheaded the effort for the Chamber to take over the Warrenton License Office, which subsequently saw significant improvements to its services.

Olearnick was not present to accept her award.